Leche merengada is a classic Spanish frozen summer drink made from egg whites and milk infused with lemon and cinnamon. You’ll find leche merengada at any Spanish ice cream parlour – it’s a perennial favourite with thirsty kids and nostalgic adults looking for a taste of their childhood. Its sweet milky flavour is similar to horchata, but its ingredients are internationally available (no pesky tiger nuts here!)

As with most Spanish dishes, the three simple flavours of milk, lemon and cinnamon combine perfectly to create a balanced, refreshing drink. The lemon gives the leche merengada a zesty twang, complemented by the sweet richness of the cinnamon. Best of all, the egg whites give the drink a light, fluffy texture – almost like a tasty glass of snow!

The Spanish speakers out there will recognise that ‘merengada’ refers to the egg white whipping technique. Top trick – to make the perfect leche merengada, you need to whip the egg whites into stiff peaks, just like the process of making meringues.

Leche merengada is incredibly easy to whip up at home for an afternoon snack or simple dessert, so find someone with strong arms and start whipping!

Instructions
1. Remove the peel from the lemon in large pieces using a vegetable peeler. Add to a large saucepan with the milk, sugar and cinnamon sticks. Bring to the boil over a medium heat, stirring from time to time to make sure that the sugar is dissolving.
2. When the mixture has boiled, turn off the heat and leave to cool for 30 minutes.
3. While the mixture is cooling, whip the egg whites into stiff peaks in a bowl using a whisk or a hand mixer with a whisk attachment.
4. Strain the milk into a bowl to remove the pieces of lemon peel and cinnamon sticks. Add the strained milk to the egg whites and mix gently. Some egg white may float to the surface on the milk – this is fine. You can drink the leche merengada as it is, or follow step 5 for an icy granita version!
5. (Optional) Pour the milk and egg white mixture into a large tupperware container and place in the freezer. When the mixture has started to freeze (this took about an hour in our freezer), mix with a fork to break up the ice crystals. Repeat until the leche merengada has the desired texture.
6. Serve your leche merengada in large glasses with a sprinkle of cinnamon on top! 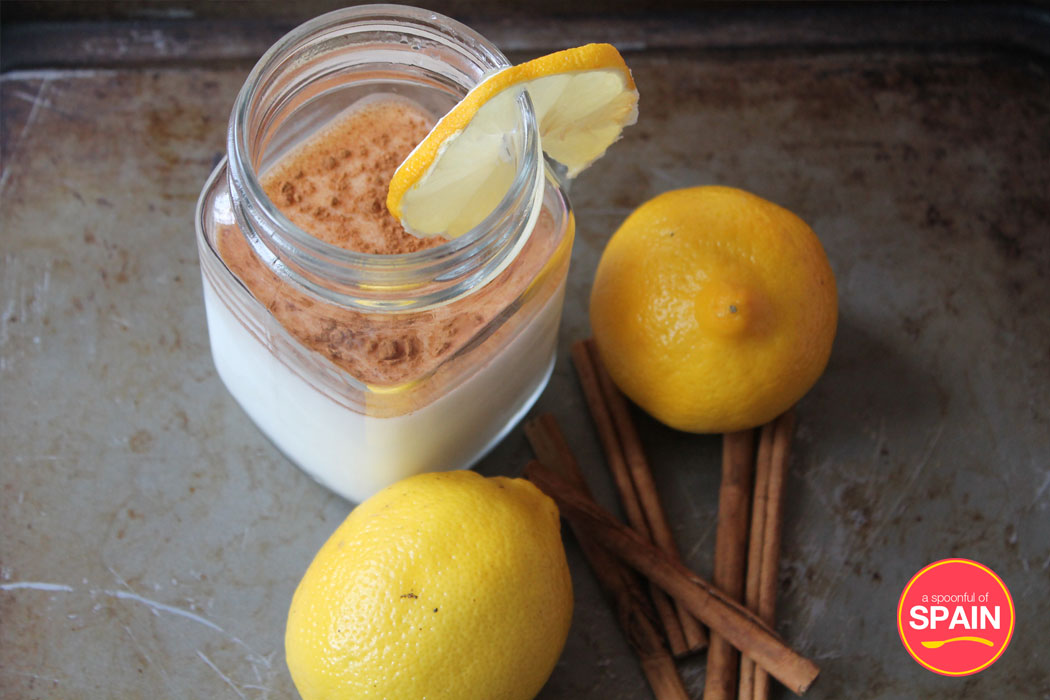