Some would say that there’s nothing more Spanish than a Spanish omelette, or a tortilla de patatas. You can find Spanish omelette served all over Spain. In Madrid, they eat slices of tortilla with coffee for breakfast, and in other places, as a tapa, a ración for sharing, or as a light dinner.

Don’t be scared by the amount of oil in this recipe – you need to use lots of oil so that the potatoes, and later the omelette, don’t stick to the saucepan. I would also strongly recommend using non-stick saucepans for this recipe – we’ve tried with normal saucepans, and it was a huge disaster! I would also like to highlight the importance of using quality ingredients, especially olive oil. Spanish omelette only has 4 ingredients, and so there is space for each flavour to sing. Although it may sound bland, fresh quality ingredients, prepared simply, are the key to classic delicious Spanish cuisine!

1. Peel the potatoes. Cut each potato into quarters, and then slice each quarter thinly. It’s important to work quickly, or your potatoes will oxidise and turn black!

2. Add 150ml olive oil to a wide, deep non-stick saucepan. Add the sliced potatoes and stir to coat evenly in oil. Cover the saucepan with a lid and cook on a medium heat for around 30 minutes. Season with salt to taste. Stir gently every five minutes to make sure that all the slices are cooked evenly. Remove from the heat when the potatoes are golden and cooked through, but not so soft that they crumble apart.

3. Break the eggs into a large bowl and mix thoroughly with a fork. (or alternatively, separate the whites from the yolks, and beat separately. When the egg white have become foamy, combine with the yolks and stir gently until evenly mixed. This will give your omelette amazing height, but it is not essential.)

4. Add the cooked potatoes to the egg mixture in the bowl and mix thoroughly.

7. Serve in slices as part of a main meal, or cut into squares for a tapa. If you are need of a carb fest – add slices of the omelette to french bread with ketchup for a bocadillo de tortilla de patatas!

Did you manage to flip your omelette successfully? Do you add anything else to your Spanish omelette? Let us know in the comments below! 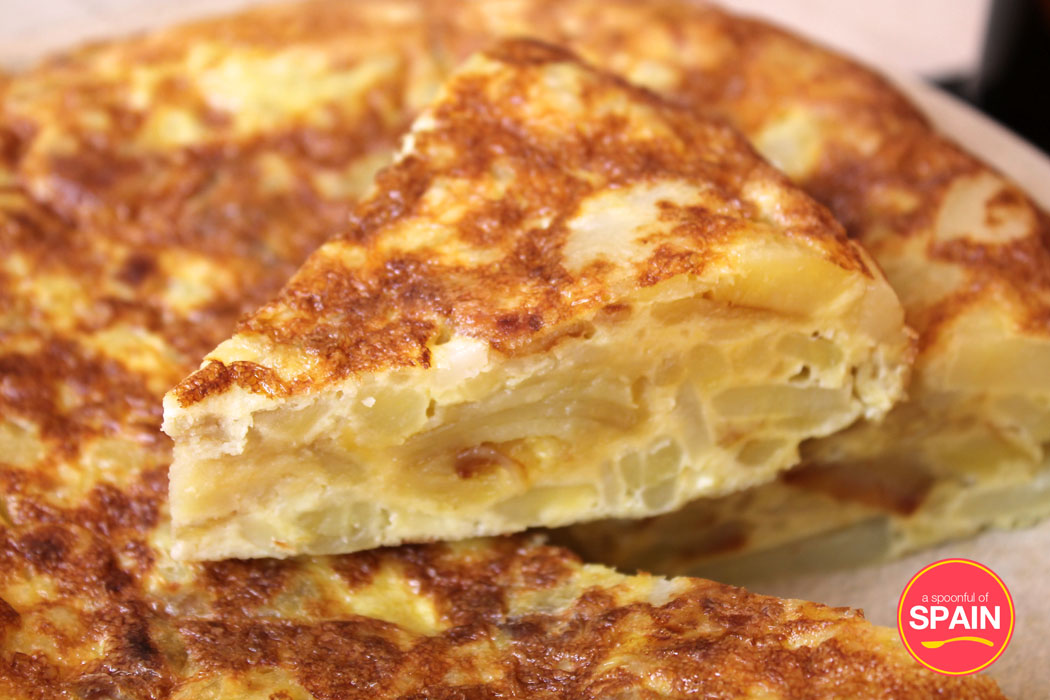